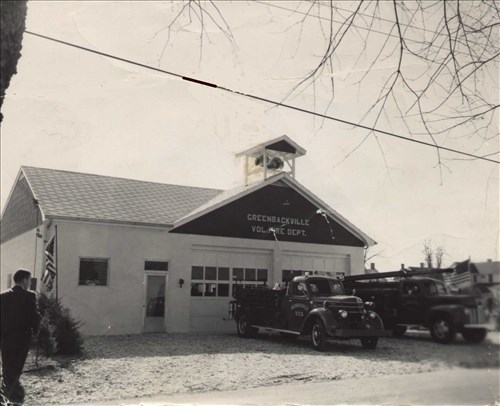 Jan. 1956 - Fire damages a home located on Front Street, in Greenbackville, on January 1st. The fire was quickly extinguished by utilizing a bucket brigade since the home was only about 500 feet from the harbor. During the daylight hours of January 30th, a second house located on Stockton Avenue next to the post office is destroyed by fire. Furniture salvaged from the second fire was moved to a nearby vacant store thereby igniting a fire that destroyed the large two-story store and a brand new car that was parked outside, at 2:00 A.M., on January 31st. Fire companies from Stockton, Girdletree, New Church, Pocomoke, Snow Hill & Chincoteague responded to answer the calls for assistance.

Feb. 1956 - A Town meeting is held at the old High School building, at seven 0’clock in the evening, on February 14th, for the said purpose of forming a fire company. Town residents pledged one-thousand dollars towards starting a fire company and temporary officers were elected that same night. “The Greenbackville Volunteer Fire Department, Incorporated”, was duly organized and was officially chartered by the Commonwealth of Virginia, on April 10, 1956. Mr. Woodrow Dryden was elected to the position of Fire Chief and Mr. Merrill Marshall was elected to serve as the first President.  During this new era; the men and women met as one, and held several Chicken & Dumpling suppers at the schoolhouse to raise money for the newly formed department, since funds at the county & state level were very limited if not, non-existent.

Feb. 1956 - First unofficial Firehouse is Nelson Collin’s old barn, located across the street from the late Dora Jester’s home, on Front Street (currently named Bayfront Street). This barn stored equipment such as ladders and buckets and eventually the first engine.

March 1956 - Purchased first fire engine, a used 1938 International, from the Lombarde Beach, Maryland Fire Company, at a cost of $1,000.  The first fire was extinguished only hours after the truck had arrived. In appreciation for the engine, members of the GVFD sent several gallons of Chincoteague Bay Oysters to their fellow members in Lombarde Beach.

March 1956 - During a secret ballot, with a majority of the members present, the ladies of the Department voted to organize as a separate entity; thereby forming the Greenbackville V.F.D. Ladies Auxiliary.

March 1956 - John A. Selby, of Greenbackville, donated a small piece of property on Ellis Street, located near the center of town; to enable the department to build a Firehouse. After members toured several neighboring towns Firehouse’s; they voted to construct a building designed very similar to that of Stockton V.F.C., without the right side wing.

Oct. 1956 - Dedication of the Original Firehouse on Ellis Street was held on October 28th.

June 1957 - Household trash pickup service began, and lasted until December 1980. The beginning price was only $.25 per week. A total of four (4) trash trucks would be used over the many years. (The first trash truck was a early 1940's, unknown of make/model.)

1959 - G.V.F.D. began the tradition of making delicious Homemade Ice Cream, in three flavors: Vanilla, Chocolate and Pineapple. The five-gallon (20 Quart) ice cream freezers were manufactured by the White Mountain Company. In the beginning, the Ice Cream was served by the cup, at departmental suppers that were held. During the early 1960's the membership began selling the delicacy to the public by the quart, during March and November of each year. The long-standing tradition is still continued to this day, and is a very well-known local fundraising event.

1959 - Mortgage burning ceremony is held. The note was in the amount of six thousand five hundred dollars ($6,500.00), borrowed from the Hallwood National Bank.

April 1960 - G.V.F.D. purchased a used 1948 open cab Seagrave pumper, on April 17th. This truck had no doors, and had a 6 volt electrical system. Unit was obtained from the Commonwealth of Virginia, for the amount of $76.15. It ran as the first due Engine until 1963. It was retired from service during 1968 and sold for parts to Mr. Harris Bloxom, of Greenbackville, in the amount of $100.00 on April 11, 1968. The original 1938 International pumper was then transformed into a Trash Truck; the second truck to serve as the Trash Truck.)

March 1962 - The Ash Wednesday Storm, devastates Greenbackville and what was left of it's sister town, Franklin City. Many homes along the waterfront in "Franklin" were destroyed and almost the entire town of Greenbackville was covered by several feet of high tidal water. The "nor'easters" storm surge also caused flooding in excess of 18" inside the newly constructed Greenbackville Firehouse, which is located about two blocks inland from the Chincoteague Bay. After the tide finally receded, members of the GVFD  were assisted by our neighbors from the Stockton Vol. Fire Company with the task of washing out mud & debris that had been left behind from the storm, in the interior of most homes. (It should be noted that Greenbackville will always be grateful to the citizens of Stockton, Maryland; the Stockton Volunteer Fire Company; the Maryland National Guard and members of the U.S. Navy, who assisted in evacuating our tiny seaside town, which had been literally forgotton by the Commonwealth of Virginia). Many of the town of Greenbackville & Franklin City's residents were fed and housed at the Stockton firehouse for up to two weeks following the storm. Atlantic District Supervisor H. Vernon Drewer of Saxis, was the first Virginia elected official to tour Greenbackville, and asked for immediate relief assistance. Sheriff Adair Matthews appointed Fire Chief Charles Bodley as the acting official for requesting aid for Greenbackville and Franklin City.

1970 - Purchased a used 1947 Chevrolet truck to be used as a Trash Truck. It would be the third Trash truck to serve the community.

1970 - The wing adding the Meeting Room and Storage Room was completed.

1971 - Purchased a used 1953 Ford/American LaFrance fire engine from the Onancock Fire Department, in the amount of $2,500.00 to replace the old '48 Seagrave; which had been retired three (3) years earlier, in 1968. It was first designated Unit #7, later Re-numbered Unit 2-4. This unit was sold in 1979, presumably to Somerset Well Drilling Company of Marion Station, Maryland.

1973 - After several discussions, the members voted to purchased two (2) Self-Contained Breathing Apparatus (SCBA); at a cost of $700.

1974 - Purchased a used Ford truck, at a cost of $3,150.00 to be used as a Trash truck. It would serve as the fourth, and final trash truck. (The membership voted to end the trash collection as of December 1980, partially due to lack of interest by the residents.)

1975 - Purchased a used 750 GPM Barton-American front mount pump to be installed on the 1963 International.  It was installed by F.L. Anderson Company of Baltimore, Maryland. Just a few months later, this “new” pump, would operate for over eight hours at the disastrous Atlantic High School Fire, in Oak Hall.

1978 - The Greenbackville V.F.D. Rescue Squad was formed, originally as a separate entity of the Fire Department; as the closest ambulance service was located over 12 miles away, in Snow Hill, Maryland.

1979 - Purchased the first Ambulance from the Ocean City Vol. Fire Company, a 1973 Chevrolet, designated “Unit 2-1”. To make room for the ambulance, the second run engine, Unit 2-4 had to be sold. (During the 60’s & 70's the dept. had operated two engines; however, beginning in 1979, GVFD decided to operate with a single Engine.)

1979 - Willie R. Sharpley, serves as President of the Del-Mar-Va Volunteer Firemen’s Association during 1979-1980; the first and only person do so from Greenbackville.

1986 - The 1978 Ford Tanker is completely refurbished including installing a new 3,000 gallon fiberglass tank, built by L.T.I., Inc., of Ephrata, PA., at a cost of $55,000. The old tank was given to Mr. Richard Culver and remained on his property for several years.

1989 - Placed "Engine 2-3", a new 1989 Pierce Lance Custom Engine, equipped with a 1250 GPM top-mount pump & 1000 gallon tank in service, on March 18. It was purchased from Pierce Manufacturing of Appleton, Wisconsin, at a total (equipped) cost of $160,000, and was the first ever Pierce-Custom engine on the entire Eastern Shore of Virginia. GVFD also placed into service 1,000 feet of 5” Large Diameter Supply Hose (LDH) on this new engine. The old “beloved” 1963 International pumper was retired from service after serving for almost 27 years. It was sold for $7,000 to Denny Pressler; of Beebe, Arkansas in December 1989.

1995 - Greenwood, Delaware Fire Department donated a used 1983 Dodge Van, to be used as a personnel/utility vehicle. It was designated “Unit 2-9”.

1998 - Received a donation of $100,000 from Mr. Richard A. Culver towards building a new fire station.  It is has since been told to have been the largest single monetary donation given to a fire department on Virginia’s Eastern Shore.

1999 - After conducting a decade long fund drive, and purchasing three adjacent homes; a Modern Three Bay Drive-Thru, Fire Station is constructed on Stockton Avenue, with various financial contributions from throughout our community.

2000 - The original Firehouse is partially remodeled. The GVFD & Ladies Auxiliary completely renovated the kitchen including new appliances and counter tops. New floor tiles and windows were also installed throughout the entire building. A ruptured internal water pipe would seriously damage the interior of the building during January 2004.

2002 - Purchased a used 1983 Seagrave Rescue Truck to provide extended protection for our Fire & EMS district. Designated “Rescue 2”, this unit first ran as “Squad 1” with the St. Louis Fire Department and later as “Rescue 71-6”, with the Blades, Delaware Fire Company.

2004 - Determined to preserve the heritage of our department, the original firehouse was completely renovated into a formal Banquet Hall and is officially re-dedicated as the “Greenbackville V.F.D. - Banquet Hall”.

2005 - Obtained a grant in the amount of $23,750 through the Assistance to Firefighter’s Grant Program, administered by the Department of Homeland Security; to purchase a 75 Kilowatt, John Deere Diesel Generator. It will supply emergency power to both the Fire Station and Banquet Hall.

2007 - GVFD members Thomas and Catherine Sharpley purchase a beautiful Vintage 1950 Seagrave Open-cab pumper, an almost identical replica of the original '48 Seagrave. It has "Greenbackville, Va", lettered on each side of the hood. The Sharpleys' plan to make "Antique Engine 2" available to the department for parades, funerals and other special events.

2008 - GVFD graciously accepts the title to a 1998 Ford Crown Victoria, donated by Thomas & Catherine Sharpley, of Virginia Beach, Virginia; to be used as a personnel/utility vehicle. It is Designated “2-9”. The old 1987 Ford van “Unit 2-9”, was donated to the recently organized Flatland Search & Rescue Team, of Oak Hall, Virginia.

2009 - GVFD approves the purchase of a new custom Peterbilt Tanker from Freedom Fire Equipment, of Marietta, Georgia. The contract was signed on July 14, 2009.

2009 - GVFD removes the town Christmas lights on September 17, which had adorned Stockton Avenue, Church Street and Bayfront Street for over 25 years. The lights had first been installed in 1959.

2011 - GVFD removes "Marine 2" from the fleet during November. It will be maintained by the neighboring Stockton Vol. Fire Company (Worcester County, MD. - Station 200).

2012 - GVFD removes Rescue 2 from service and the unit is officially retired on January 3, at approximately 1740 hrs. The unique apparatus served in front-line service for over 4 decades, serving in St. Louis, Missouri; Blades, Delaware and Greenbackville, Va. Ownership was transferred to Tom and Catherine Sharpley, owners of the the "Vintage Fire Brigade".

2013 - GVFD places a new 2012 Pierce Saber 75' Ladder Truck into service on February 23rd. Designated "Truck 2" it is equipped with a 1500 GPM Hale pump, 500 gallon water tank and 75' Aluminum Ladder. The unit was purchased through Brian Bashista, of Atlantic Emergency Solutions.

This information is hereby considered to be accurate, most of which was obtained from the
Original minutes of the Greenbackville Volunteer Fire Department, Inc.
Dated - February 14, 1956 - February 20, 2013